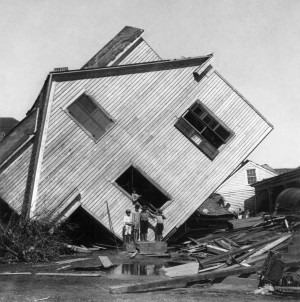 Hurricane Matthew is tearing up the eastern coast of Florida heading straight for Jacksonville, where my wife and I invested heavily in real estate. Meanwhile, I’m sitting in a Tallahassee motel filled with fellow evacuees, watching the monstrous red dot crawl across the television screen, and wishing there was something I could do. But of course, the time for doing something was long before the storm began to form out in the Atlantic. So I think about that. What did I do to get ready for disaster, and what did I fail to do?

First, insurance. All our properties are covered for “named storms.” We have replacement cost coverage, not merely actual cash value coverage. Our physical copies of the policies are stored in a safe location (not in the insured properties). The policies include a “loss of rent” provision. So far so good. But if I had it to do over again, I would not have chosen an insurance brokerage located close to our properties. Our broker is an evacuee today, just like us, and will likely be out of touch for a day or two after the storm has passed. It would have been better if he lived and worked on the far side of the state, so we could stay in close communication.

My wife and I are safe in this motel; I feel good about that, and I’ll deal with tomorrow’s troubles tomorrow.

Second, location. Part of me wants to think I should have invested far from the coast. Then I remember tornadoes. Earthquakes. Mudslides. Sink holes. Wildfires. Lightning. Blizzards. Ice storms. Droughts. The reality is, nature can damage property pretty much anywhere, so it’s probably not wise to choose a state or region on that basis. We invested where we did because it’s close to us, where we can keep an eye on things. Even with Hurricane Matthew poised to attack, I still think that makes sense. But we did resist the temptation to invest directly on the water. None of our properties are in the FEMA flood zones. We own nothing on the beach, on the St. Johns River, or the Intercoastal Waterway, even though the rental income and appreciation are usually higher there. So there’s a good chance we won’t see storm surge damage to our properties. If I were investing in California, I’d avoid liquefaction hazard zones. In forested areas, I’d maintain defensible space. In areas prone to ice storms, I’d give preference to neighborhoods where the electrical lines are buried.

Third, management. We picked a solid real estate management firm. I have a good relationship with the owner, and believe he will respond professionally to the situation. But I had to fire two others before we got to him. It’s never fun to tell someone they have to go, but today I’m very glad we kept looking until we found a manager we trust. That said, I don’t have his mobile phone number. The only way I have to get in touch is via email or his office number. That’s a mistake I plan to remedy as soon as possible.

Fourth, attitude. It would be easy to lose sleep over this. But worry never solved anything; in fact, it often makes things worse. And who am I to worry, anyway? It seems to me the same hurricane that could destroy our property on the coast might also send rain to farms far inland, possibly saving parched crops to feed farmers and their families, and many others besides. One man’s disaster is another man’s blessing. So it makes no sense to worry about the future or to ask “why me” about the past. My wife and I are safe in this motel; I feel good about that, and I’ll deal with tomorrow’s troubles tomorrow.