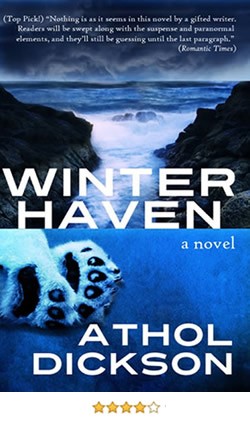 The following guest blog is an excerpt from Amazon Top 500 reviewer, Eric Wilson.

Athol Dickson has produced some works of great literary depth and originality. I first discovered him through They Shall See God, a suspenseful tale with multiple plot threads, a thriller deserving more attention than it got. Next was River Rising, an evocative tale set in the bayous of Louisiana, full of historical mystery and character. Last year’s The Cure moved to the northeastern portion of the country, building from a deep character study into a story of mystery and some suspense. All of these were enjoyable reads.

Winter Haven stays north, moving this time off the coast of Maine to the island of Winter Haven. We are thrown into a world caught in the old traditions, where locals protect their secrets while trying to find ways to survive. When Vera shows up, as an outsider, she threatens their ways, but she is determined to find out why her brother’s body has washed up on their shores thirteen years after having last seen him. Even more bizarre to her is the fact that her brother’s corpse hasn’t aged a day.

Mixing the lonely chills and eerie settings of Stephen King’s The Girl Who Loved Tom Gordon with the gothic feel of the classic Rebecca, this novel moves from one side of the island to the other as Vera searches out the truth. Though a richly detailed and atmospheric story, the pace moves right along once you settle into its ethereal feel. The search for truth is multi-layered, dealing with Vera’s childhood, her faith, her family, and the history of the island. In the end, everything she believes will be called into question–and, as she comes to realize, those questions are an important part of the journey.

Although the ending comes close to stretching credulity, Dickson’s mastery makes it pull together in a fashion that I embraced. We want Vera to understand. We want to believe along with her. Her dreams, her visions, and her nightmares, all have a purpose, and that’s what makes Winter Haven rise above the standard fare of gothic suspense.