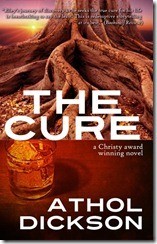 When The Cure was first published, some people were left with nagging questions about Riley Keep’s decision at the end of the story. Why would he do such a thing and why would I present his decision as if it was a good thing?

For artistic reasons, it’s usually best to let a novel speak for itself. In this case however, with apologies to literary purists everywhere, I think maybe a few words of explanation are in order.

All around the world people say “nobody’s perfect” as if it were a law of nature or a self-evident fact. Some of us may seem less morally flawed than others, but the difference is only a matter of degree. No matter how kind and caring and good we may appear to be, from time to time we all deliberately choose to do something that we know is wrong.

Most religions claim we can live moral lives if we so choose. But if that were true wouldn’t somebody, somewhere, choose the right thing every time? “Nobody’s perfect” is true the same way “what goes up must come down” is true. Like gravity, and like the urge behind Riley Keep’s alcoholism, when it comes to morality there are forces at work beyond our control. Nobody chooses goodness all the time because nobody can.

Much as a drug-addicted mother will give birth to a baby addicted to those same drugs, we are all born addicted to bad choices. Take two toddlers and put one desirable toy between them. Will you see a demonstration of selfless generosity? Will one of them offer the toy to the other? Not likely. Innocent though we’d like to think they are, the bigger, faster toddler will end up with the toy and the other one will throw a fit, as every parent knows.

Most religions focus on the symptoms of our addiction. The assumption is, if one can control the behavior, one has solved the problem. To be a good person, one has only to act like a good person. But every alcoholic knows that isn’t true. The addiction remains, whether one drinks or not.

We also try to sole this problem with science. From time to time the headlines announce cures for various addictions, but there is no such thing. There is only the replacement of one symptom with another. Nicotine patches instead of cigarettes. Methadone instead of heroin. We can “cure” gluttony with stomach stapling; we can “cure” a pornography compulsion with filters on computers, but no human invention could cure us of the reason those addictions exist in the first place.

This is an excerpt from the new afterward to The Cure by Athol Dickson, soon to be re-released in both eBook and print format.